How Amarone della Valpolicella is made

How Amarone della Valpolicella is made

A detailed guide to discover how Amarone, the famous Valpolicella red wine, is made.

Amarone is definitely one of the  most famous Italian red wines in the world. It is produced in Valpolicella, a wine region located few kilometers from Verona, in Veneto region (Italy).  Today it is considered one of the great Italian reds, an iconic wine as well as Barolo, Brunello (and Chianti) and Supertuscans.

Even though many people already know its name and maybe even drank it, only a few are aware about what makes Amarone so unique. In this article you will discover, step by step, how the king of Valpolicella, Amarone is made.

First of all Amarone is not a single-varietal wine (which means made from a single grape) but it is the result of a blend of grapes. The grapes are indigenous red varieties, that historically grow only in Valpolicella. Amarone is a DOCG wine and because of this, its production must follow some parameters and requirements set by a regulation. The choice of grapes is one of them. Some varietals are mandatory whereas some others are optional, depending on the choice and taste of winemaker.

The mandatory grapes are:

It is also possible to include in Amarone blend, up to a maximum of 25% of grapes coming from the following varietals (Optional grapes): 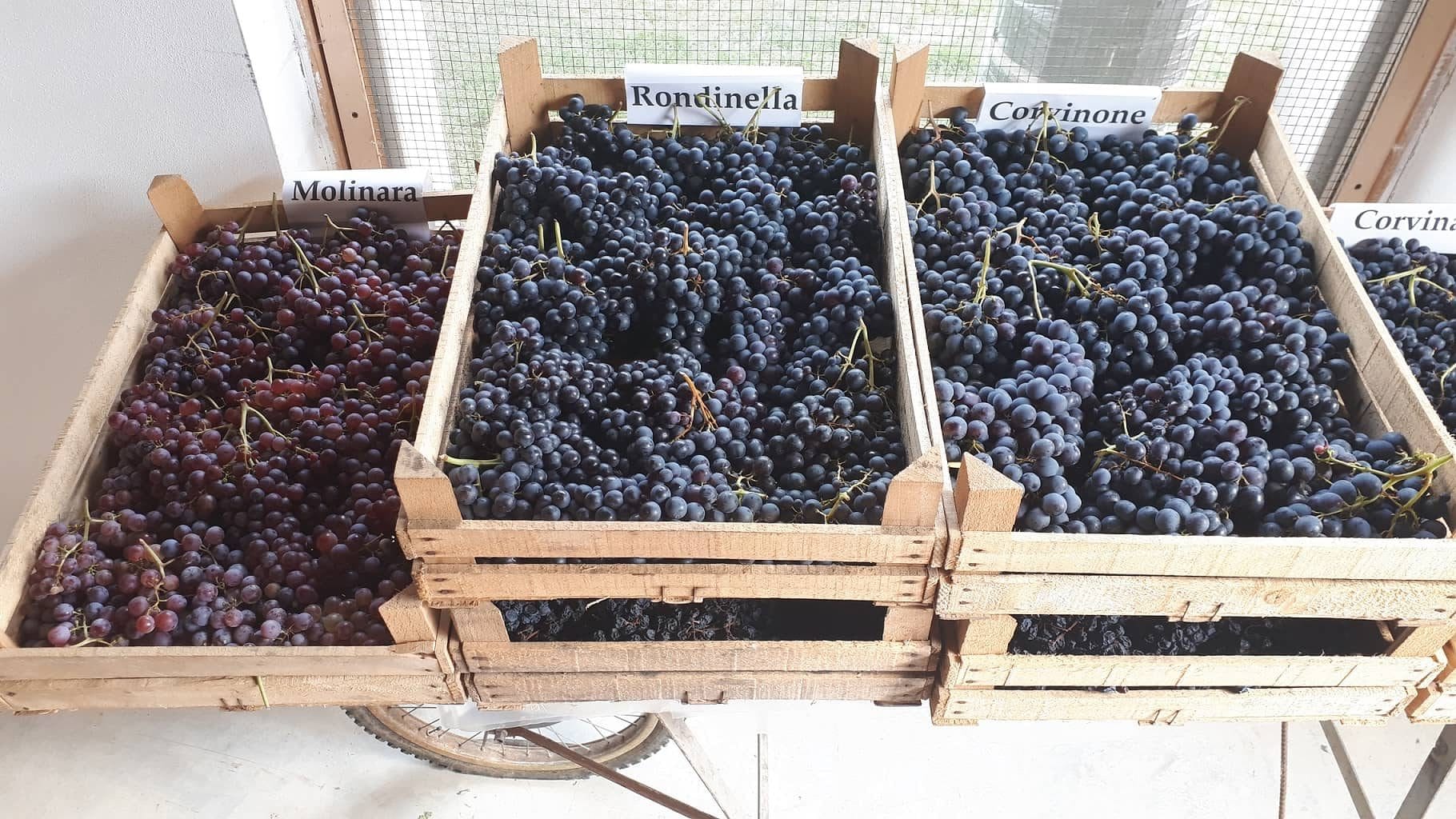 Manual harvest is another fundamental step to understand how Amarone is made.

There are essentially two reasons for this. The first is the selection of the bunches which only a human (and skilled) eye can do. In fact, not all bunches are suitable for the next step, the drying process. Amarone grapes must be perfectly healthy, with not damaged skin. The bunch must not be compact but scattered, in order to ensure air circulation among berries and therefore avoiding the risk of mold and fungus. Secondly, grapes must be handled with delicacy and care in order not to break skins, not to release must and not start fermentation.

Amarone bunches are laid in wooden or plastic crates, in which they will spend the drying period. It is important to load only a single layer of grapes per case. In this way in fact no grape will be crushed under the weight of the others and the air will be in contact with all grapes.

Valpolicella is one of the few regions in the world where harvesting is still done with traditional methods, which have remained almost unchanged over the centuries. Visiting the cellars in September during the harvest is an unique experience that gives the feeling of taking a step back in time. 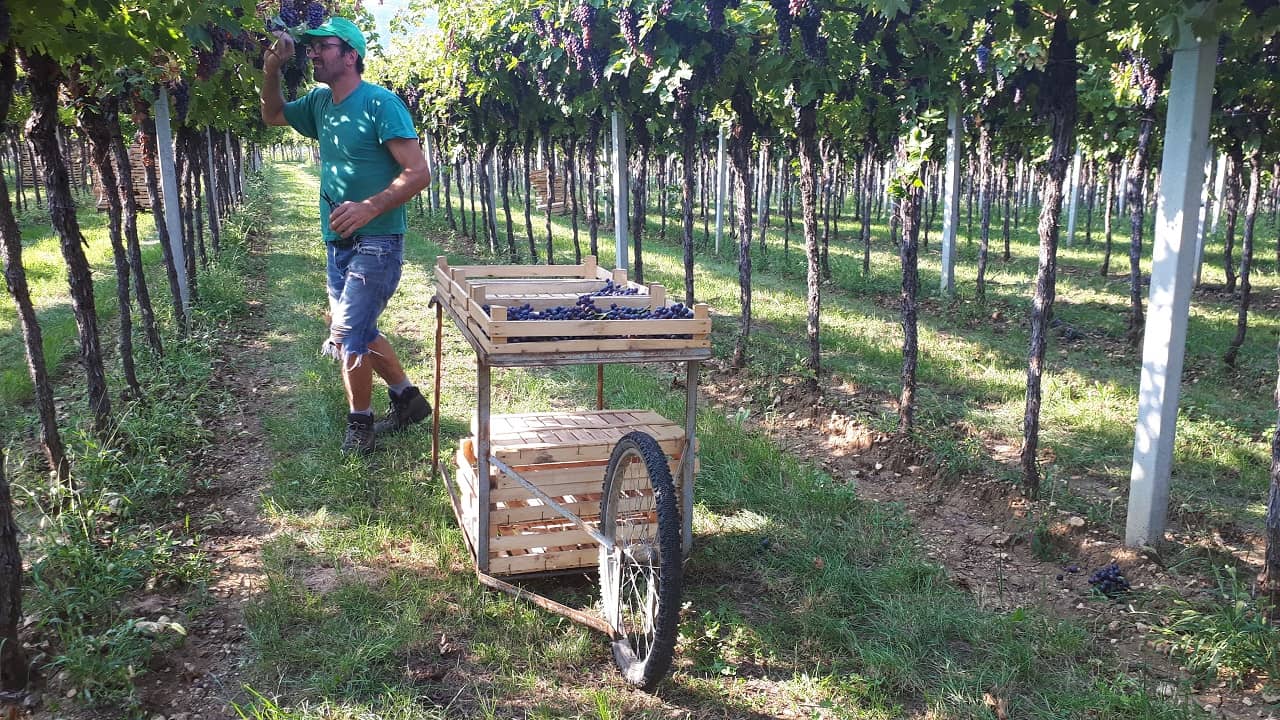 It is impossible to understand how Amarone is made without knowing the “appassimento” method. This is the signature characteristic of Amarone della Valpolicella, its real trademark.

Amarone is not made with fresh grapes but with partially dehydrated grapes. This is tecnique in Italy (and in the world) to naturally concentrate grape sugars  to make sweet wines. Amarone instead is a dry wine, ( Amaro in Italian means “bitter” in fact). For this reason Amarone is almost an unique wine. Only one other Italian wine uses this technique, Sforzato wine from Valtellina, obtained by dried Nebbiolo grapes.

In Valpolicella Appassimento is an ancient method, which has its roots 2000 years ago. The Romans more than 2000 years ago,  discovered that, with the right cares, it was much easier to preserve grapes instead of wine. Grapes simply dried while wine, after some months, was practically undrinkable.

How does Appassimento process work in practice?

The grape crates are stacked and stored in proper rooms called “fruttai”. These rooms are large lofts with high ceilings and big windows which allow maximum ventilation. Grapes stay here for a variable period (about 100-120 days) during which air circulates and dries the berries. Today, as in the past, the process occurs in as natural way as possible. It is in fact possible to use large fans and dehumidifiers (powered in the most humid days) but not heat pumps. It’s  very important, especially in the first days of drying, to check the grape frequently and quickly remove the bunches which show the first signs of mold.

Few producers still dry grapes on “arele“, the traditional bamboo canes racks. In the past the arele were the tool to breed silkworms to produce silk  to become the tool to dry grapes in autumn. Over the years, this system was abandoned since it implies two steps: to collect the grapes into crates (in the vineyard) and move the bunches to the arele (in the winery). A labor intensive method but still practiced by few producers who are particularly faithful to tradition.

During the Appassimento, natural sugars of grapes (fructose and glucose) increase because of the evaporation of water. Chemical transformations occur in the berries, which lead to a concentration of glycerine (responsible for the smoothness of wine) and polyphenolic substances in the skin (aromatic). Depending on the vintage a beneficial form of a grey fungus, can affect some grapes.  The so called noble rot gives the wine a rounder body and distinct spicy notes.

After 3 months and a half of drying, the grapes lost about 40% of their weight. The production of a bottle of Amarone requires about twice the quantity of grapes needed for other wines. 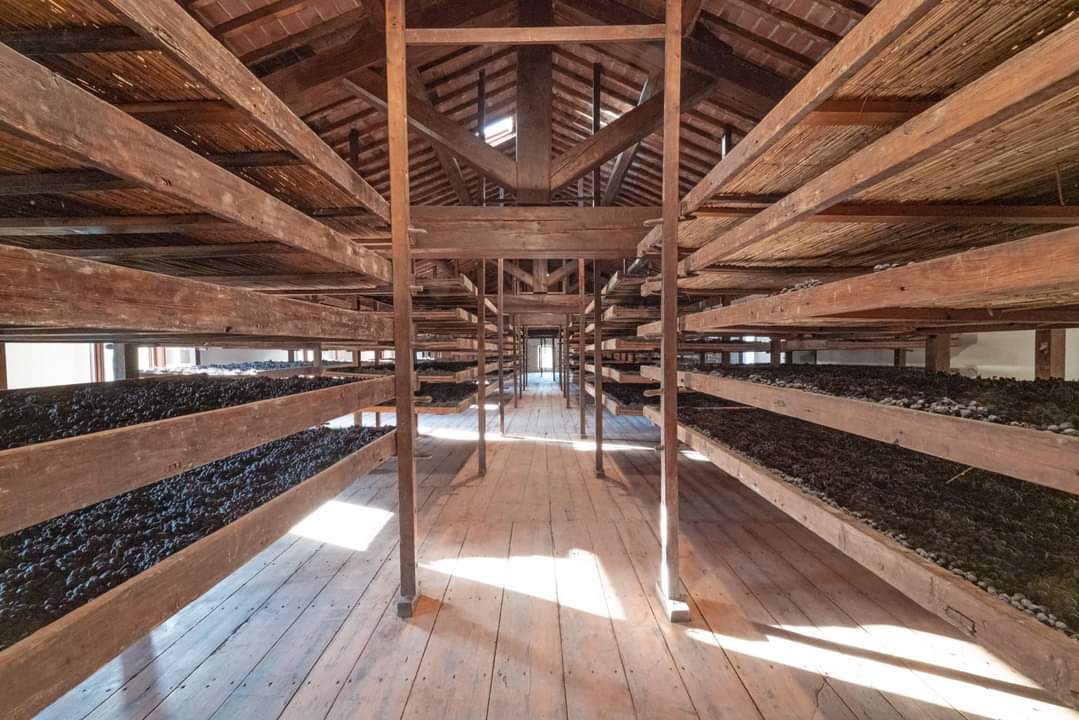 Alcholic fermentation is the base process for the production of wine. During fermentation the grape sugars become alcohol by the action of the  yeasts. Yeasts basically “eat” the sugars while creating alcohol (and also carbon dioxide). It is a natural process which normally stops when the sugars finished.

As all the red wines, also in the Amarone winemaking,  the grapes ferment on their skins to extracit colour and tannin. Amarone fermentation is slow and long. It can last up to 30 days, which is about the double of the average of other wines. This for two reasons. The first one is because the must obtained by crushing Amarone grapes has higher sugar content, therefore the fermentation process takes a little longer. The high sugar level in the must explains also the high Amarone alcohol content  (between 15% and 17% Vol.). Secondly the fermentation takes more time because occurs in wintertime, between December and January, when the low temperatures slows down the action of the yeasts.

Depending on the winemaker, fermentation temperatures range from 14° to 18° C for the more “traditionalists” who seek finesse and elegance, and from 22° to 26° C for those who seek powerful aromas  and colours concentration.

By law, Amarone della Valpolicella has to age at least 2 years before the release on the market. These 2 years are calculated after the year of the harvest, which is also the vintage written in the label. This means, for instance, that Amarone vintage 2020 will not be available until 2023.

There are no specifications about the type of tank or wood. Traditionally Amarone ageing takes place in  big Slavonian oak casks. The large size of the barrel (25 or 50 HL) ensures a minimal wood-wine contact so that wood aromas and tannins don’t overwhelm the Amarone grape aromas. The great thickness of the wood slows down the micro-oxygenation making the Amarone evolve slowly. Large oak casks enhance the wine elegance and the grape varietal flavours. It’s very common for those winemakers who use these bigger cask, to extend the maturation up to 4-5 even 8 years.

Valpolicella winemakers start using smaller barrels only recently. Barriques provide a  modern interpretation of Amarone characterized by vanilla notes (French oak) or spicy and smoky notes (if the wood is American oak). It is not unusual to use different types of casks in order to balance the different characteristics. Generally speaking, smaller barrels speed up the aging process, so a couple of years of maturation in barrique is enough.

Also there are very few wineries that, instead of wooden barrels,  have opted for stainless steel tanks in order to preserve the freshness of primary aromas of grapes.

The drying process plus the long maturation give Amarone a very high ageing potential. It’s a wine that can last even 20 years in your cellar, if stored in the proper conditions.

After the maturation, it follows a few months bottle refinenement to integrate the its many chemical components and to reach the perfect organoleptic balance.

This long and complex winemaking process explains also the cost of this wine, which is more expansive than the average of the other Italian reds. Thanks to all these steps Amarone is a full bodied, complex and velvety wine.  As a result, it is a “meditation wine” in which the smoothness and the rich bouquet balance the high alcohol volume. 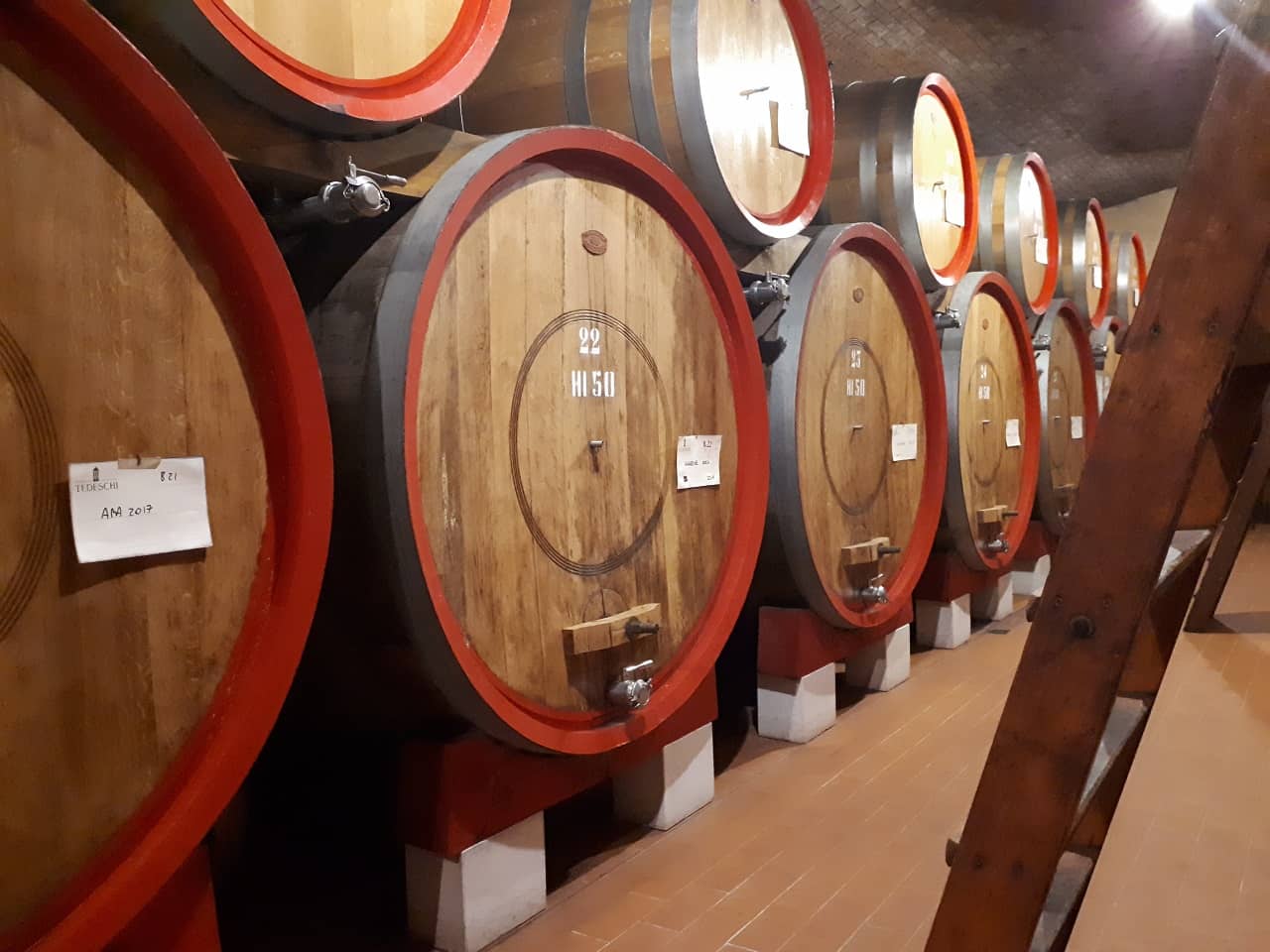 Now you have discovered how Amarone is made. If you are curious to explore Valpolicella wineries guided by a professional sommelier and local guide, our AMARONE WINE TOUR is for you!

Do not hesitate to contact us! We will be happy to give you all the information you need.

We do not spam. You can unsubscribe anytime.